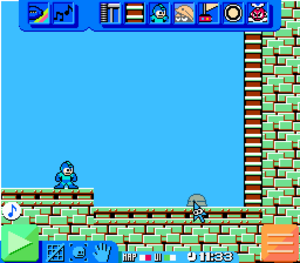 A level being edited in the level builder.

The Level Builder is one of the main features of Mega Man Maker. Using the Level Builder, a user can create their own levels, save them as .MMLV level files, and share them with others. Players are also able to collaborate together over the internet in real time to build levels together using the Build Online feature of the Level Builder. Levels can be shared either by sending .MMLV files to others or by using the Online features to upload a level to Mega Man Maker's online server (after a play test to verify it is possible to complete) and shared with others.

The Level Builder contains three different toolbars, each with different sets of tools and features.

This toolbar is focused on assets that can be placed within a created level.

These both appear in each of the assets menus associated to the Top Toolbar.

This toolbar contains other useful tools unrelated to placing assets.

Contains all other tools that don't fit into the two prior two toolbars.

These are the sub-categories in Level Settings in greater detail:

These tools are exclusive to button shortcuts: 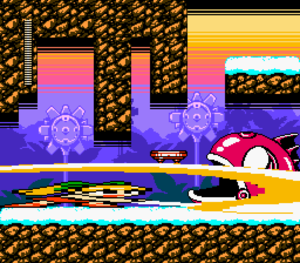 Glitchy side-effects of improperly text editing a .MMLV file such as having a wide playable character.

.MMLV is the file format used to store data about a Mega Man Maker level.

These files can be edited with certain text editing programs, such as Notepad and some others. Editing the text in these files can change various aspects of the level, including removing limitations on what text characters can and cannot be used in a level's name, how long level names can be, and even how various assets in the level function.

Playing a text edited level files may in some instances cause crashing, glitches, or other oddities to occur that otherwise would not. This could be caused by the player text editing certain values assigned to assets in ways they are not normally intended to be used.

To access .MMLV files saved in-game, they are located in %localappdata%/MegaMaker/Levels on a computer with a Windows operating system. The files may be in another location for computers running Windows through software such as Wine on other operating systems.