Before you read! This article contains content in an upcoming update. Information can change over time. 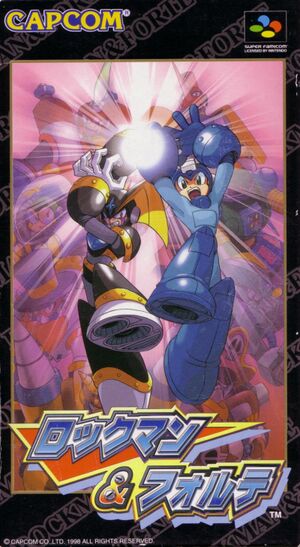 Box art for the SNES version of Mega Man and Bass

Mega Man & Bass (released as Rockman & Forte [ロックマン&フォルテ Rokkuman ando Forute] in Japan) is a Mega Man series platform game released for the Super Famicom on April 24th, 1998, and Game Boy Advance on August 10th, 2002. The game has two playable characters: Mega Man, who can slide and charge the Mega Buster, and Bass, who can shoot in seven directions, dash, and double jump. It takes many assets from Mega Man 8, although it differs in some concepts from the game.

As of version 1.7.5, there are no folders for its features, but two elements are taken from Mega Man & Bass. Version 1.3.0 brought Bass with the gameplay's foundations from this game and his fusion with Treble, Treble Boost, while 1.5.0 brought the reflective variant of the Yoku Block. Version 1.8.0 will focus on adding much more content from the game.