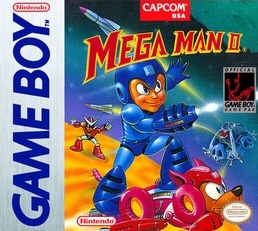 Mega Man II (released in Japan as "Rockman World 2") is the second Mega Man installment on the Game Boy. It was released in Japan on December 20, 1991 and in North America in February 1992.

Like its prequel, Mega Man: Dr. Wily's Revenge, there are two sets of four Robot Masters, however, this time there are four from Mega Man 2 and four from Mega Man 3. Mega Man II is the also first game in the Game Boy series to have eight Robot Master stages compared to only four in Mega Man: Dr. Wily's Revenge. Mega Man's reprogrammed future self Quint (also known alternatively as Quintet in some promotional material) debuts as a major rival for Mega Man.

The game is commonly criticized for its large number of glitches and design mistakes compared to most other Mega Man games.