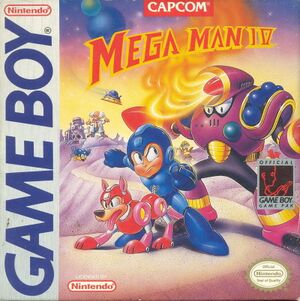 Mega Man IV (released in Japan as "Rockman World 4") is the fourth Mega Man installment on the Game Boy. It was released in Japan on October 29, 1993 and in North America in December 12 1993.

As of version 1.7.5, only assets that made to the game are Ballade related, but as their Mega Man 10 versions. However, some modifications made to certain assets that make a reappearance in Mega Man IV have been implemented into Mega Man Maker.