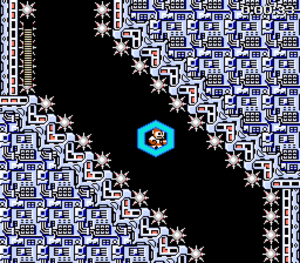 an Image of a spike fall

Spike Fall is a level type in Mega Man Maker in which the player will fall through 1 or more screens all the while dodging spikes on either side of them. Smaller spike falls are often seen in part of regular Traditional levels.

Debris Fall is a variant of spike falls in which you do not die on contact. Debris Falls can use Sea Mine, Jet Bomb, or other enemies instead of spikes. However, this setup often requires a lot more vertically connected screens than a regular spike fall due to how the enemies move and behave. Upon taking damage the player will have invincibility frames which will allow him to pass through lasers and other damage sources.

Astro Elevator is an ascending Astro Gate section that can change a spike fall to be a spike rise. Alternately, instead of using spikes the creator can use Jet Bombs or other enemies in an attempt to avoid taking damage. Boss fights can also be played on an Astro Elevator however it will limit the height the player can jump