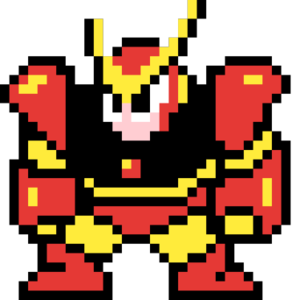 An image of Pronto Man

Not to be confused with the playable character, Proto Man.

Pronto Man is a meme from the Mega Man Maker Forums created after forum user "JacobKennedyMan" misspelled the name "Proto Man" while making a suggestion to have the character added to Mega Man Maker as a mini-boss.

Many forum users and moderators joined in contributing to the original topic, which had over 1,000 replies and over 28,000 total views before its deletion.

The thread, originally located in "Feedback and suggestions", was moved to the Off-Topic "General chat" in 05/13/18 by then website admin HoundBlue. The thread was deleted by AwaggKing in October 2018 after it was derailed countless times by role-players.

A surviving forum topic summarizing some of the history of Pronto Man can be found here: https://megamanmaker.com/forum/viewtopic.php?p=12737#p12737. This has since been lost as the forums were archived.

However, various community members have have made assumptions that he looks like Quick Man wearing Guts Man's armor. Many people have made sprites and art based on that description, but the most used image is made by the user "Darckarremer". Capabilities Pronto Man has no known official capabilities.

However, various community members have have made assumptions of what abilities Pronto Man is capable of, some include:

However, various community members have invented different weapons or attacks they would believe he would have, some include:

The first Pronto Man account on the Mega Man Maker Forums, he was nicknamed "2F@ST4U" after his forum signature, and commonly referred to himself as "THE SWAG STRIDER".

"2F@ST4U" Pronto Man would create a Forum Game where he would ask the users his weakness. If the answer was incorrect, they would become Protomen servants for him, to be used as target practice.

During the Forum Game, on the date November 20th, 2017, "2F@ST4U" Pronto Man stated that he was delayed by something, however did not reveal what it was, only that the delay was resolved.

After "2F@ST4U" Pronto Man departure from the forums, the user Mega Pokebattlerz continued the game in his absence.

The Forum Game topic can be located here: https://megamanmaker.com/forum/viewtopic.php?p=11330#p11330, this has also been lost.

An account created by forum staff, complete with its own "real pronto man" staff category.

The account initially only made a single post, stating that he was keeping order on the forums, implied that "2F@ST4U" Pronto Man was an imposter (and a troll), and made a comment about being temporarily stuck in Mega Man 4 due to how slow the game loaded his gigantically large HP.

Dark Man 5 / Disguise Man's main gimmick was that he had the ability to disguise himself as other entities, and was initially using the power to pretend to be Pronto Man, until he was caught, and started disguising as other entities, such as a fake LIGHTspeed Man with a blue and green color scheme.

The main intentions of disguising and pretending to be other entities, was to intimidate foes, and to gather information for Dr. Wily that could potentially be useful to capture actual Pronto Man.

He got busted pretending to be other characters and people multiple times due to his flawed disguises, and often spoke in morse code.

He was supposedly defeated by someone named "Mr. E".

On June 2, 2021, The Real Pronto Man was banned along with the Dr. Wily account as of today for offensive swearing and spamming in Fecal Forgotten Factory by forum moderator Uranus. Since the forums were archived, they may never return

The Dr. Wily account's main goal was to capture Pronto Man, and either use him for his own diabolical plans, or destroy him if that was not possible. He was also implied to be the creator of Dark Man 5 / Disguise Man initially supporting his efforts, but later abandoning him after he had failed multiple times.

The Dr. Wily account generally always answered people that tried attacking or capturing him, with a robotic duplicate of himself, as a distraction allowing for his escape. All of TRONPO_MAN's posts responding to the Dr. Wily account received such responses.

The TRONPO_MAN account was generally an enigma, regularly posting vague cryptic statements, and vague religious rantings, but would on the rare occasion make statement that would be less vague and cryptic than usual.

The TRONPO_MAN account supposedly had some relation to Pronto Man as he would make vague statements about him, some implying a positive nostalgic connection, and others implying complete hatred for their existence, but the full extent of their connection was never confirmed.

It had been implied that TRONPO_MAN may have existed in cyberspace as some kind of digital entity, as he once mentioned a firewall among other things associated to computers, but this was never confirmed.

The TRONPO_MAN account was an enemy of the Dr. Wily account and his minions, including the the Dark Man 5 / Disguse Man account. ==LIGHTspeed Man==. LIGHTspeed Man was supposedly created by forum user "Hyper Megaman", (formerly known as "Megamanvwxyz") to serve as a means to defeat Pronto Man.

According to him, Dr. Light would make a robotic copy of himself, and both himself and Dr. Light would use the parts of this copy as well as many speed-type Robot Masters, to create a robot possibly fast enough to beat Pronto Man forever.

According to Hyper Megaman, LIGHTspeed Man no longer exists, as Dr. Light apparently decided to use the parts of his robotic copy for a different purpose. It is unknown what the new purpose was.

The Police was a minor account of the Pronto Man lore. The Police's main purpose was to arrest The Real Pronto Man and the Dr. Wily account. They have the appearance of the police officers from Mega Man 9, specifically Fake Man's artwork.

The Police only ever appeared in the Fecal Forgotten Factory topic "File 13" by The Real Pronto Man. The only other thread they posted on was in "last post wins 2" by forum user "BenPlusMM".

The robot is capable of calculating users' posts in order to give them the "Mega Maker" role to access to channels not usable for newcomers or users otherwise lacking the role. It also has commands to cause effects to images, show the stats of a Discord user, play with an 8ball with random questions, and has some functions similar to those of the Mega Bot. It can also give and remove roles.

Formerly it had functions like kicking and banning users, but they were cut due to being considered too dangerous.

Its commands would later be ported and expanded by Mors and Goldstorm to the Mega Bot.

Although the Pronto Man bot is no longer present on the Mega Man Maker server, there is a 1.04% chance for Pronto Man to show up on commands like %rps, %name, and similar commands, which is the same chance as any other Robot Master.

Pronto Man was brought back to the Mega Man Maker server on June 8, 2021 to combat an influx of bot accounts. A new feature was added to the bot that allows it to ban users with a specific username. This was not possible with the Mega Bot/ProtoBot as the bot had already been verified by Discord, locking the ability to do so.