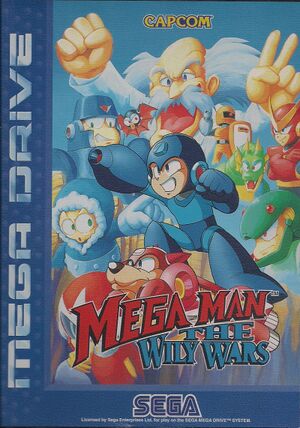 Box art for the Mega Drive version of Mega Man: The Wily Wars

Mega Man: The Wily Wars, also known as Rockman Megaworld, is a video game that compiles the first three Mega Man games, Mega Man 1, Mega Man 2 and Mega Man 3 with some tweaks and a new visual style. In addition to those games, it comes with an unique mode, Wily Tower, where the bosses include Buster Rod G, Mega Water S and Hyper Storm H.

There is limited representation of this game as of 1.7.5. However, in 1.7.0 the music from this game was included despite the update's focus on the main eleven games and in Mega Man Powered Up.