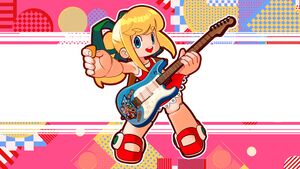 Promotional picture for 1.7.0 by BNMotive, with background made by okazz. It shows Roll playing a guitar.

1.7.0 is a major update focused on expanding the content from the Mega Man games already represented, namely, the eleven Mega Man numbered games. Unlike previous major updates, which were centered on implementing content from one or two Mega Man games, 1.7.0 aims to amplify the content of games already represented in Mega Man Maker. WreckingPrograms stated that the team "[would] not be adding content from Mega Man & Bass or any other game not already represented in Mega Man Maker." The update also modifies some in-game entities. 1.7.0 is also WreckingPrograms' final update as a programmer and the project's leader, noting that he wanted to move onto other projects. He said that his original vision for the game of "creating an intuitive level editor featuring content from all main-line Mega Man titles" is complete as of version 1.6, with version 1.7 serving "as a good way of tying up loose ends". Luigi and Goldstorm were selected as the new project leaders for after the update's release.

Two contests were held where users could vote for an asset to be added in 1.7.0, the first being an enemy and the second being a weapon. A live stream that showed off the reveal trailer early with the developers answering questions from the community afterwards was organized by Saphy and hosted on WreckingPrograms's YouTube channel on January 9, 2021, a day before the update's release. 1.7.0 is also the first update since 1.0.0 to include a weapon based on an attack from the Super Smash Bros. fighting game franchise, namely the Command Selection.

The logo for the enemy contest

The pie chart breakdown of the enemy contest results

The logo for the weapon contest

On July 25, 2020, WreckingPrograms announced a weapon contest similar to the enemy contest held before. Similarly to the previous one, it was also restricted to the six NES games, Mega Man 9 and Mega Man 10 in order to implement the weapon in a timely manner. Unlike the enemy contest however, there was only one poll due to the more limited roster of weapons to add. The deadline to vote was July 28, 2020.

Special utilities like Rush Marine, Wire and Balloon Adaptor were included as options.

On July 31, 2020, the Super Arm was announced as the winning weapon, which received 26.2% of the votes. Unlike the previous contest, the developers did not disclose the voting numbers for other candidates. The weapon was ported and modified from a proof of concept Luigi made for the weapon after finishing his assignments for 1.5.0.

The promotional image for the 1.7.0 server update by Alex, BigMaster, and BNMotive

On August 31, 2020, an update for the Online server was announced. Players received more tags to choose from to search for levels. They can also signal a level, for example if it was stolen, obscene or unbeatable. In addition, players can upload 30 levels instead of previously 20. For the Wily Challenge, players have now the option to set the amount of lives they want to have as well as the level quality.