The Support Items, or Transport Items as they were originally called include Item-1, Item-2 and Item-3. They are utility weapons that were added in Mega Man Maker version 1.2.0. For the most part, they retain their original functions from Mega Man 2. 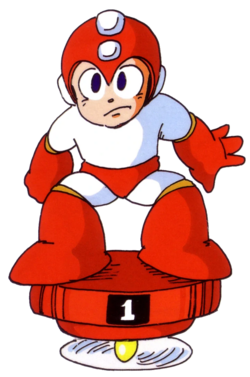 Item-1 is a floating platform that slowly rises into the air and disappears after a period of time. Each platform consumes 2 units of Weapon Energy, and up to 3 platforms can be on the screen at a time. In Mega Man 2, Mega Man receives this item after defeating Heat Man. 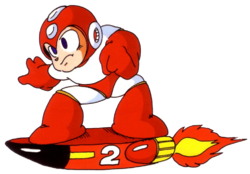 Item-2 is a rocket sled similar to Proto Man's Proto Jet utility. When ridden, it is much faster than Rush Jet, but the player cannot control their altitude or fire shots. While in flight, it consumes 1 unit of Weapon Energy every 0.5 seconds. In Mega Man 2, Mega Man receives this item after defeating Air Man. 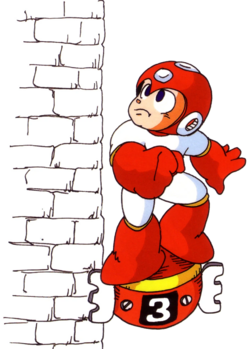 Item-3 is a climbing elevator platform that bounces along the ground until it latches on to a wall. Once it latches on to a wall, the player can change its direction by jumping on it. It will automatically change direction when it reaches the top or the bottom of a wall. While on screen, it consumes 1 unit of Weapon Energy every second. In Mega Man 2, Mega Man receives this weapon after defeating Flash Man.